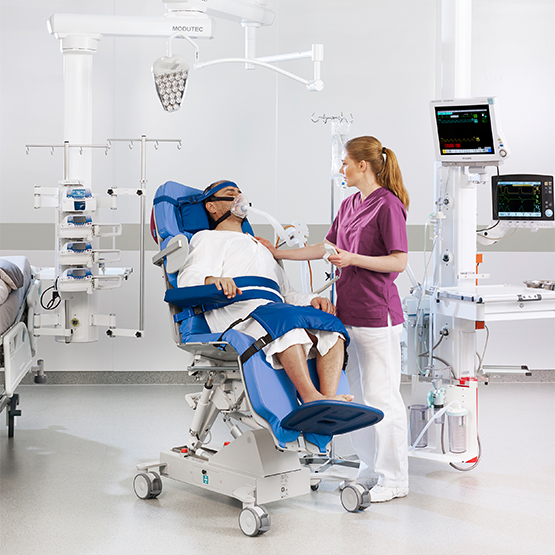 Early mobilization in the ICU

Early mobilization of the ICU patient has been demonstrated as feasible, safe, and beneficial in improving physical function, and shortening hospital and ICU (Intensive Care Unit) stays.*

Early mobilization of the ICU patient has been demonstrated as feasible, safe, and beneficial in improving physical function, and shortening hospital and ICU (Intensive Care Unit) stays.*

Immobility and bed-fastness contribute in a negative way in the development of weakness which is associated with impairment in ICU survivors’ physical function, quality of life, and return to work. (Morris 2007, Truong 2009, Herridge 2003, Titsworth 2012)

Within less than 24 hours, many body systems are affected by adverse changes associated with immobility. Body systems affected include the respiratory and cardiovascular system, the renal and gastrointestinal functions, as well as the skin and musculoskeletal system. Critically ill patients may lose significant muscle mass; Herridge found an 18% reduction in body weight of ARDS patients at time of ICU discharge. In addition, physical inactivity contributes to the development of atelectasis, insulin resistance, and joint contractures. (Herridge 2003)

Early mobilization including physical and occupational therapy in the earliest days of critical illness has shown to be safe and well tolerated, and resulted in better functional outcomes at hospital discharge, a shorter duration of delirium, and more ventilator-free days compared with standard care. (Brahmbatt 2010)

Structured early mobilization of ICU patient is performed with the aim to:

Mobilizing mechanically ventilated patients in the ICU by sitting and standing out of bed has been demonstrated as feasible and safe. There have been multiple studies demonstrating successful outcomes combined with low rates of serious adverse events.*

The recommendations of the European Respiratory Society and European Society of Intensive Care Medicine (ESICM) states that a multidisciplinary focus on early mobilization is necessary as part of daily clinical routines in the ICU. Strict exclusion criteria should be avoided and the patient should be assessed holistically. Early mobilization should be performed with a dedicated team approach and an individualized patient protocol. (Truong 2009, Hopkins 2010, Garzon-Serrano 2011)

The major physical benefits of getting the ventilated ICU patient into a standing position have been identified as improving respiratory function as well as for increasing musculoskeletal strength. While getting the ventilated weak patient up to a standing position by using a standing/tilting device, the physiotherapists will be able to work with the patient on weight bearing, lower limb exercises, passive stretches, and balance; it works as a support in the progression towards active mobilization. (Chang et al 2004a)

Standing position during mechanical ventilation improves the respiratory function, compliance and oxygen, and it stimulates autonomic activity, and reduces cardiac stress from compression. (Hoste 2005, Zhu Chang 2004b, Gosselink 2008) A team specializing in “Central Intensive and Emergency Medicine” at the Clinic in Cologne, performed a study placing their patient in an upright position on a Sara Combilizer with very good results. The patients were raised to an upright (tilted 60 degrees) position and this position was maintained for two hours. The result was a clear improvement in oxygen uptake and the patients’ circulation did not become unstable. (Dueck 2010)

Sitting in a reclined seating position is an alternative

Using a positioning device where the degree of reclining can be altered to meet the patient’s need, provides an important advantage for patients who are very weak. (Dean et al 2008)

Early mobilization of ICU patients has been shown to decrease days on mechanical ventilation and decrease length of ICU and hospital stay. (Schweickert 2009, Bassett 2012, McWilliams 2013)

Lord et. al. 2013 have developed a financial model, showing that investment in an ICU early rehabilitation program can generate net financial savings for hospitals. It shows that even under the most conservative assumptions, the net cost of implementing an early mobilization program in the ICU is modest relative to the substantial improvements in patient outcomes.